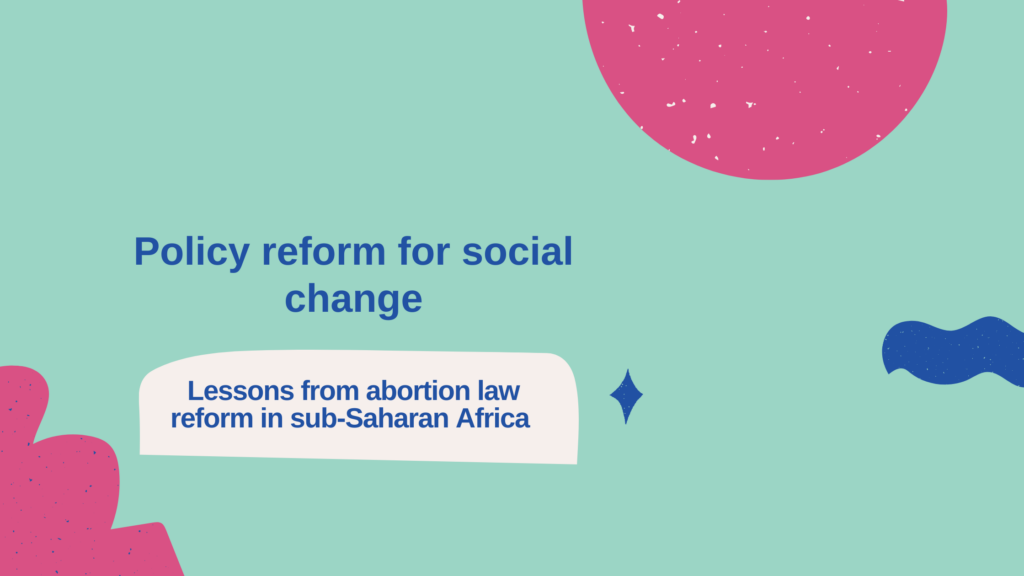 Since 2000, 21 sub-Saharan African countries have reformed their penal codes or passed laws to expand the legal grounds for abortion (Bankole et al, 2020). This is a tremendous achievement which has had and will continue to have an immensely positive impact on African women’s sexual and reproductive health and rights (SRHR). 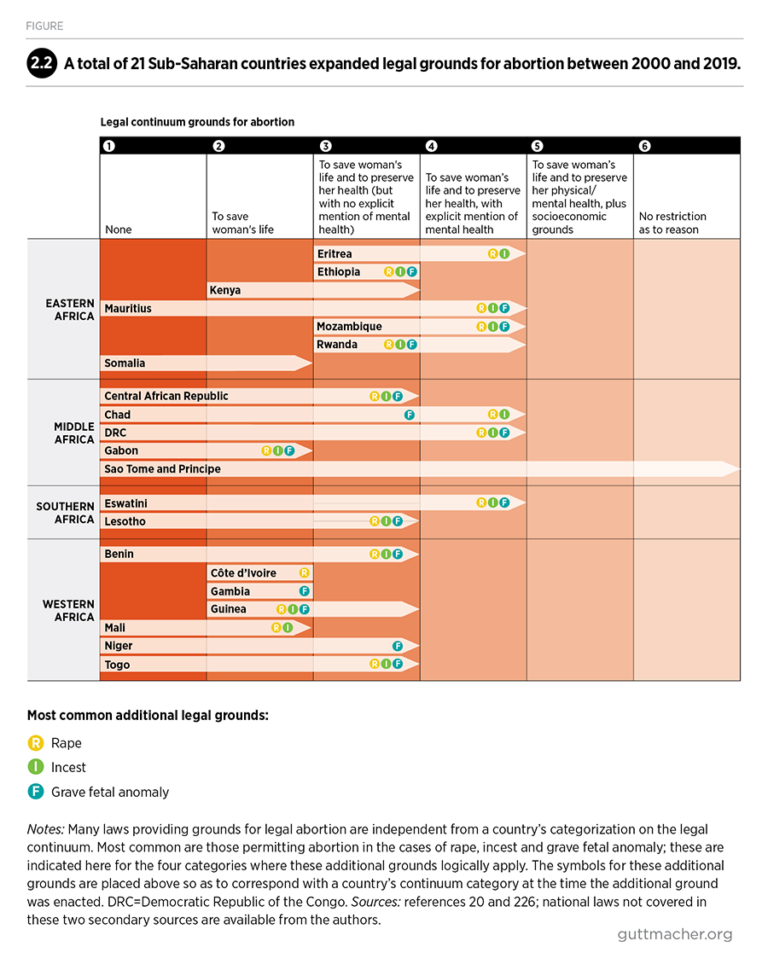 A conducive policy environment is often a prerequisite for social change. One of the areas where this is highly evident is in SRHR and especially when it comes to access to abortion.

If we apply the socio-ecological model (SEM) to access to abortion services, we find that in several geographies, the most prominent barrier is a restrictive policy environment. When we look closer, we can see that in order for an individual’s access to services to increase, we will also need to work at additional levels (individual, interpersonal, community, health-facility) to enable service access and uptake. 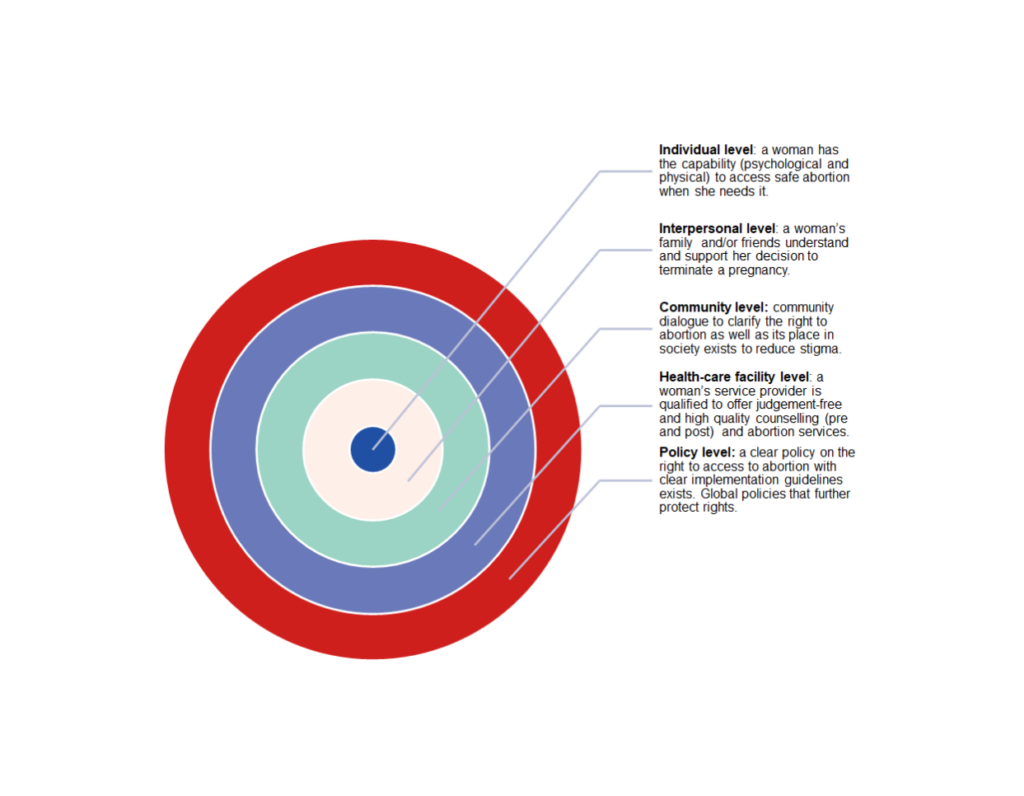 In this piece, I’d like to zoom into how change in abortion laws in sub-Saharan Africa was achieved over the past two decades. There are some important lessons to be learnt on effective strategies that can transform health equity. Here are a few policy change tactics that have contributed to the recent policy reforms (Bankole et al, 2020).

Tactic 1: Using an international policy that countries have ratified.

Undoubtedly, one of the key success factors in abortion law reform in Africa is the Maputo Protocol, which is the African Union’s main legal instrument for protecting women’s rights. It clearly states that Member States shall “protect the reproductive rights of women by authorising medical [here, ‘medical’ means ‘safe’] abortion in cases of sexual assault, rape, incest, and where the continued pregnancy endangers the mental and physical health of the mother or the life of the mother or the foetus” (Bankole et al, 2020). The Maputo Protocol provides a solid legal foundation to demand legal access to abortion, to preserve a woman’s health including her mental health. In recent years, the Maputo Protocol has been used as the basis to expand as well as achieve law reform in several countries, most recently the Democratic Republic of Congo and in Rwanda.

One of the first African countries to have progressive abortion laws was South Africa, which decriminalised abortion in 1996. The tactic employed by advocates at the time was to build coalitions around the formulation of the post-Apartheid constitution to highlight how unsafe abortion impacted Black South African women. This proved to be a very effective tactic and the Termination of Pregnancy Act, with one of the rarest provisions of abortion upon request, is still in force.

Other examples of seizing opportune timing come from Kenya and Somalia. In both countries, reforms to expand abortion laws happened when constitutional amendments were being made. Although the legal scope is not as large as it is in South Africa, it still enabled moving the needle from a total ban on abortion for it to at least be permitted to save a woman’s life.

Government officials taking up advocacy on polarising issues such as abortion is an important tactic in policy reform. This is because their support for issues both legitimises the work being done by civil society actors as well as offers access to support from colleagues who can continue intragovernmental advocacy. In the case of abortion law reform in Mauritius, one of the most influential moments was the speech by the then Minister of Gender Equality, Child Development and Family Welfare, on the health care challenges faced by young women in Mauritius including unsafe abortion.

Tactic 4: Expanding the interpretation of the law.

Rather than creating new laws, some African countries have reformed interpretations of the current laws (Ethiopia, Ghana and Zambia). In these instances, it comes down to who, for example, should assert that a woman was raped when she seeks as abortion. In many countries, a woman will have to prove that she was raped, which is in and of itself an enormous access barrier. However, countries like Ethiopia have reformed the law to state that a woman’s claim that she was raped is sufficient grounds to grant her an abortion.  This, along with clear and expanded clinical guidelines, decreased unsafe abortion-related morbidity by 10% in just six years.

Social and behaviour change is as important as the existence of legal frameworks.

Bankole et al (2020) note that “law reform alone far from guarantees that women will get the safe procedures that they are legally entitled to. Implementation of a law matters far more than its wording, and many obstacles prevent new laws from changing entrenched behaviours. Failure to inform the public, health care providers and government officials about what a new law entails is a common barrier to implementation.”

It is important to further understand how countries with restrictive abortion laws have managed to change the tide, because while it is not the end all of service access, it is crucial to have a legal framework to ensure that services provided are of high quality and for personnel to be trained to provide the best service. However, if we do not work across the socio-ecological model when it comes to safe abortion access, we will not succeed. The painful reality is that even in countries with progressive laws such as South Africa, women still opt for unsafe providers due to psychological, social and structural barriers.