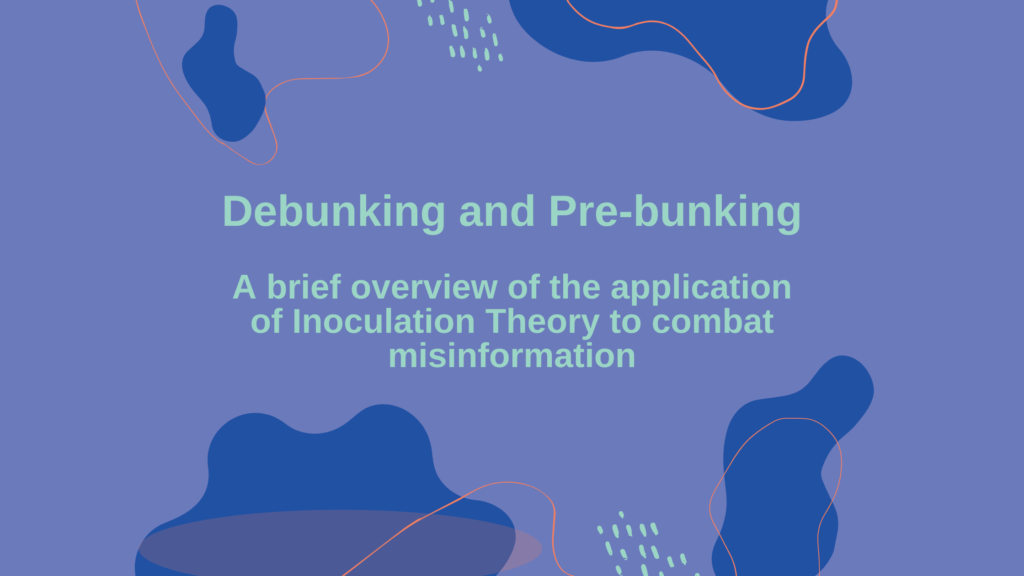 In 1964, social psychologist William McGuire wondered how resistance to persuasive messages can be built. Motivated by the idea of recovering brainwashed American prisoners of war, he came up with the analogy of looking at a persuasive message as an infectious disease. Inoculation Theory postulates that attitudes can be inoculated against persuasive attacks by building the ‘cognitive immune system’, the same way that one can build biological immunity. Similarly to a biological vaccination, this psychological vaccination can be brought about by exposing individuals to a persuasive message that contains weakened versions of the argument.

Recently, work by Compton et al (2016) and van der Linden (2022) has highlighted the mounting evidence for the design of messages to counter misinformation using Inoculation Theory. One of the many exciting features of Inoculation Theory is that it can be used to both treat misinformed individuals (debunk) as well as psychologically vaccinate against future misinformation (pre-bunk).

This piece summarises the key tenets of the application of Inoculation Theory to treat against as well as prevent infection with misinformation.

Research by van der Linden (2022) has shown that one of the major determining factors to whether a debunk message is effective or not is the quality of its design. To this end, he offers four steps to designing a successful debunk message.

Lead with the facts

Misinformation spreads because it is repeated. The repetition of information is effective for two reasons. First, people think that information that they encounter repeatedly is true, also known as the illusory truth effect. Secondly, information that is repeated becomes more available in our short-term memory, also known as processing fluency. Therefore, the first step towards designing an effective debunk message is to lead with the facts. The information needs to be simple and sticky, while maintaining accuracy. What will make the information sticky will of course depend on the target audience. The key thing is to lead with the correct information, and not the false information.  For example, a factual message could be “the IUD is a safe and convenient contraceptive method preferred by hundreds of thousands of African women.”

Warn about the myth

Following the inoculation analogy, for people to build cognitive immunity against false information, they need to be exposed to a safe dose of false information. At the second stage, one needs to present the target audience with a warning of the type of false information that they may encounter, along with a low dose of the message that should only be presented once. For example, the low-dose false message could be “the IUD is not made for African women.”

It is then important to explain to people why this myth is not true and the way in which the information has been designed to mislead them. The motivation of the communicator should be clearly explained as well as how they used their words to try to trick the audience into believing the false information. In our example, the culprit could be exposed as trying to elicit in-group/out-group emotions amongst African women by making them falsely believe that IUDs are not for them, while there is ample scientific evidence on its perfect safety for African women and that in fact hundreds of thousands of African women already use one.

The message should end with presenting the fact again to reinforce it. It should also include a credible alternative explanation. For our IUD example, we could include a video by an African WHO-affiliated doctor who explains the safety of the IUD along with an interview with an African woman who uses one and vouches for how happy she is with it.

The pathway to prophylactic messages is slightly different in that one starts with variations of the false message. One type of messaging triggers a response to a threat, while another offers a low dose of falsehood, or a pre-bunk.

Psychological inoculation can be triggered through a motivation threat response, where one attempts to defend themselves against the threat of the false information. Going back to our IUD example, we could present women with a message such as “there is an intentional false message being spread in your social media network about IUDs” and adding that this is purely fictional and a source of proof that it is incorrect information.

The second way is to present the pre-bunk message in the form of a low dose of the false information. This could be same type of message used in debunking where we warn about the myth, e.g. “the IUD is not made for African women”. This is then followed by truthful refutations.

The application of Inoculation Theory to message design is not only highly effective, but it also has some remarkable additional features (Compton et al., 2016) that make it feasible and efficient for use in international development:

Have you used Inoculation Theory in your work? Share your insights with me here!